Ants are skinny with a narrow connection between their thorax and abdomen. Ants have mouthparts that can chew and antennae with a bend in the middle. Ants range in size from extremely tiny to very large. 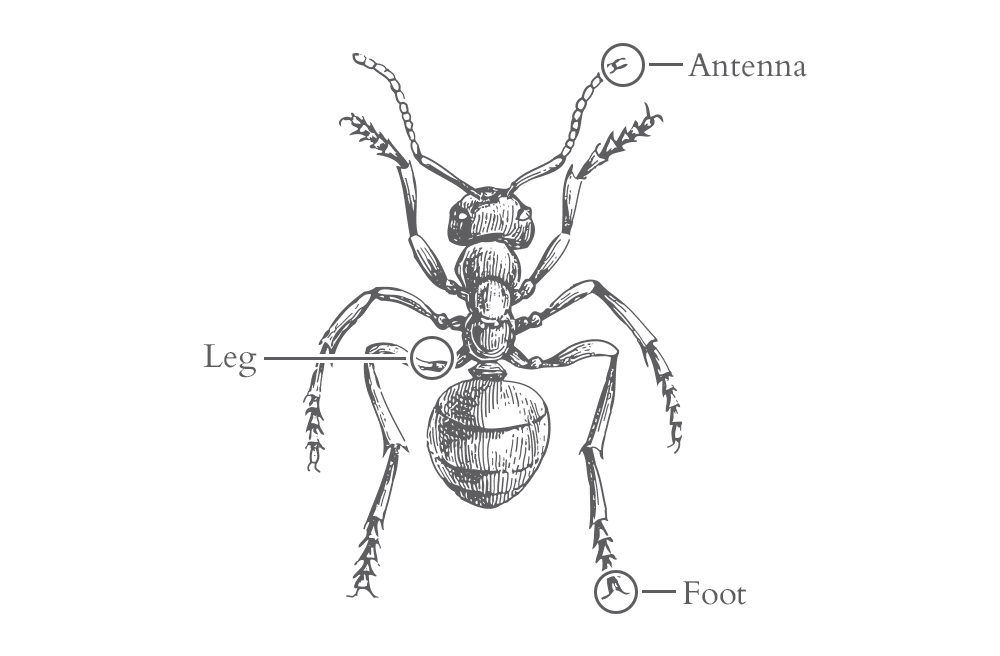 According to the University of Florida, the most common types of ants in Florida can be grouped as either house-infesting, yard-infesting, and carpenter ants. Below, we'll take a closer look at some of these nuisance and potentially destructive ants.

These large, nocturnal ants use their mandibles to chew through wood to build nests inside. They prefer dead, damp wood for their nests, which makes the vulnerable areas around and under your windows, decks, roof eaves, and porches likely places to be infested by carpenter ants. 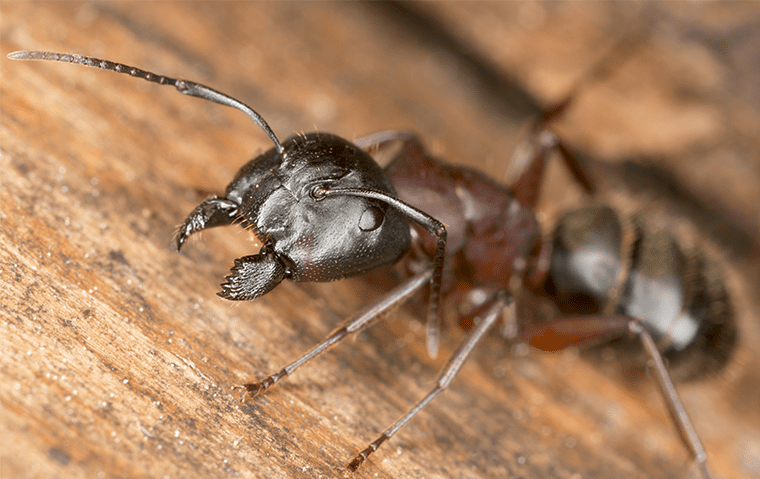 Very small, these ants are commonly found in homes and hospitals and are sometimes considered the most difficult of all ants to control. They establish multiple colonies throughout the structure and have the ability to survive most household pest control treatments. 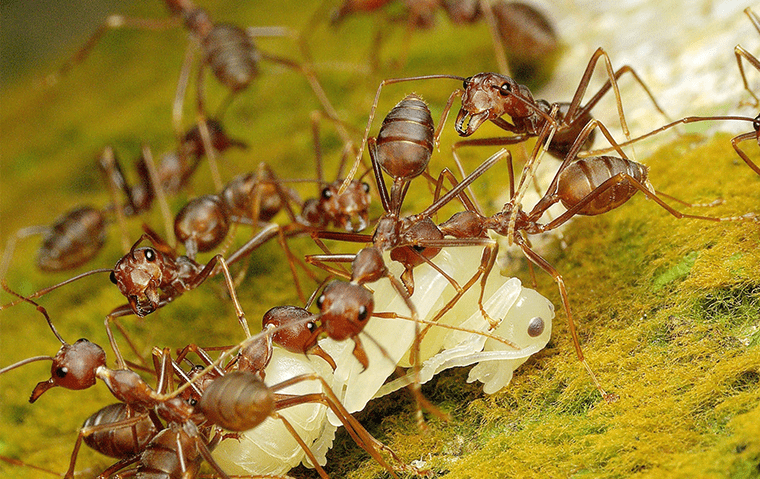 Tiny ants with a dark head and translucent legs and gasters, ghost ants are found in large numbers in Florida and other tropical areas and are a typical nuisance to greenhouse owners. They are highly adaptable to nesting habitats and are found both indoors and outdoors. In homes, ghost ants are commonly found in wall voids, cabinetry, baseboards, and potted plants. 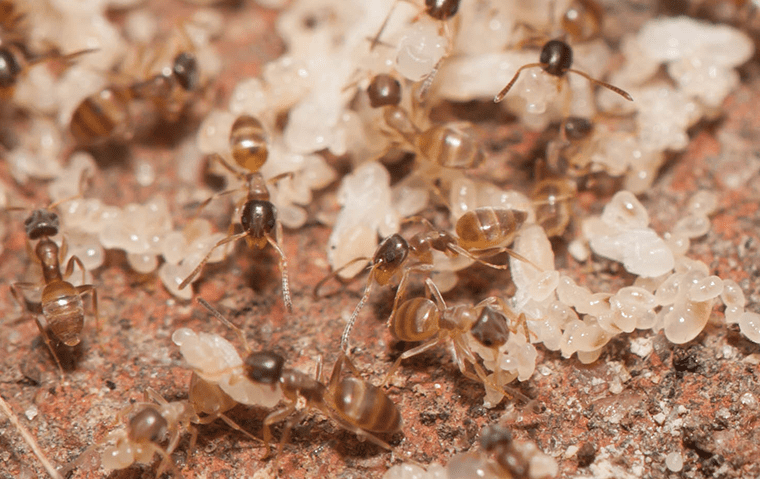 Small, aggressive ants, they will repeatedly sting any intruding human or animal. Fire ants thrive in warm temperatures and avoid dark areas, and they commonly build nests in the ground with visible mounds. The diet of the fire ant consists of animals and vegetables, and they will even consume dead animals. It is important to treat the entire yard in order to control fire ants. 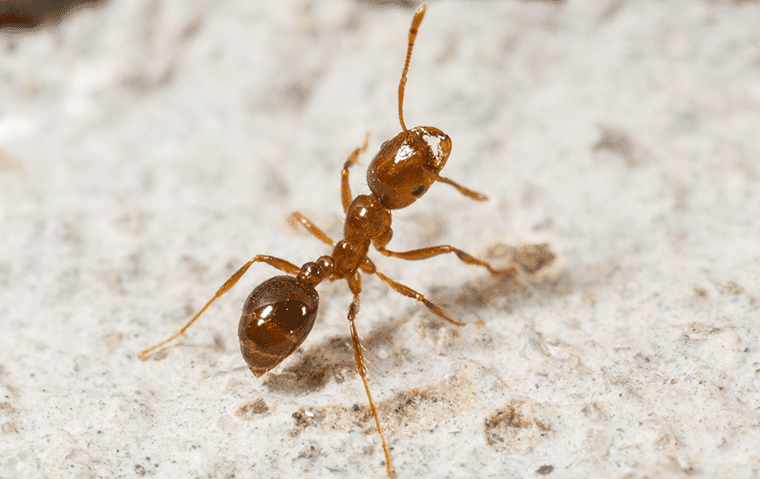 They get their name from their acrobatic movement of raising their abdomens over their heads when they are disturbed. Acrobat ants will also emit a foul-smelling odor, so disturb at your own risk! Their diet consists of honeydew, insects, and the sugary waste excreted by insects that consume sap. 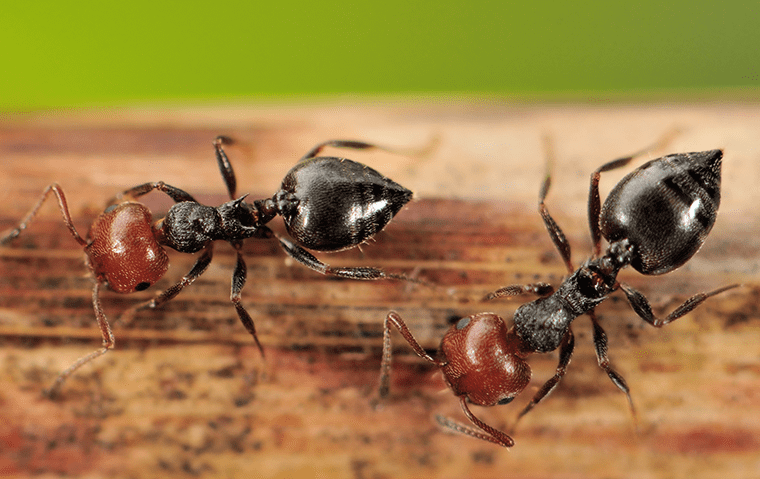 These ants are medium-sized and light to dark brown in color. They are highly adaptable and can build nests most anywhere, although they tend to nest in moist soil, under boards, next to or under buildings, and along sidewalks. When given a choice, Argentine ants will choose a sweet diet, but they will eat almost anything including eggs, fats, meats, and oils. They have thousands of ants in their colony and infest entire properties. 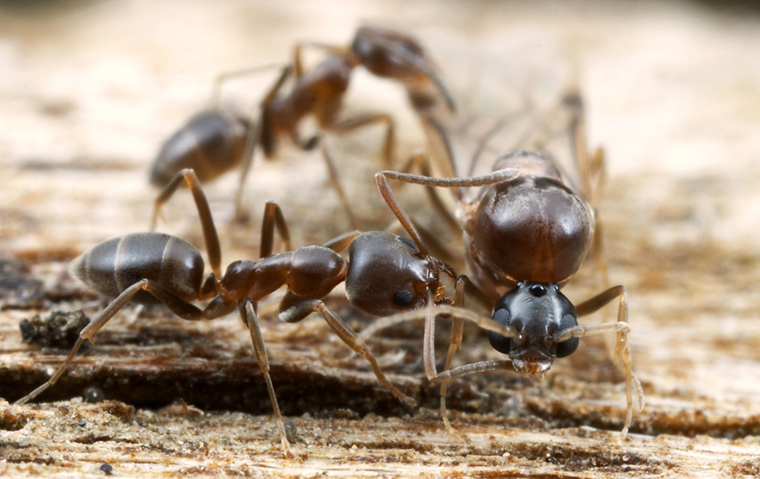 Their name derives from their tendency to build nests by driveways, sidewalks and other paved areas outdoors. When inside, pavement ants will nest in walls or under your floors. They have a preference for greasy foods but are also known for eating live and dead insects, seeds, and a variety of foods consumed by humans. 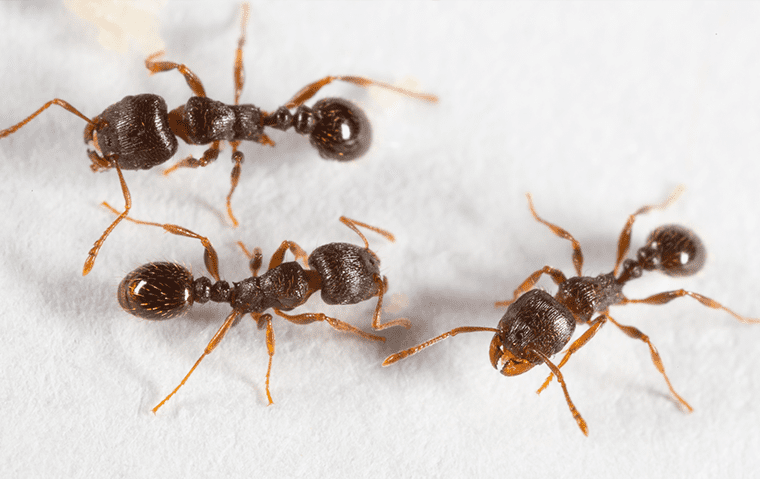 Known as stink ants, sugar ants, and coconut ants because they emit the smell of a rotten coconut when their bodies are crushed, these ants forage for food both day and night along well-traveled trails. 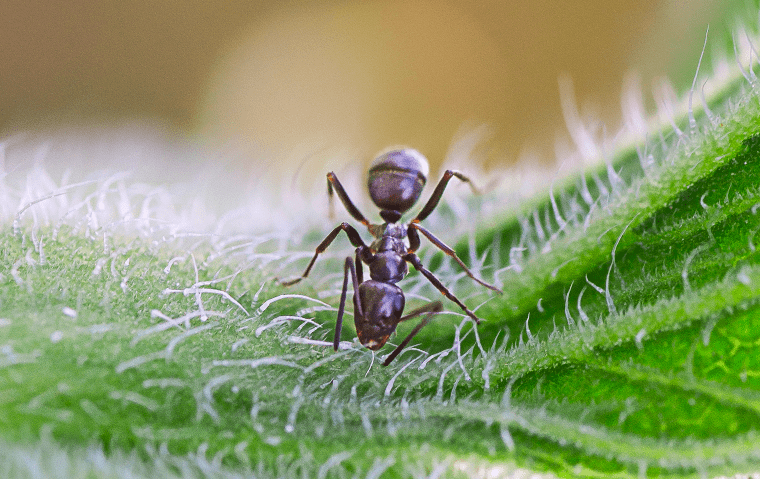 Crazy ants are tiny. Adults typically range in size from 1/16th to 1/8th of an inch in length. They range in color from brownish-red to black and they look like your basic ant. What really sets this species of ant apart from other species of ants, and where their name was derived from, is the way they move. Crazy ants don’t walk together in a line the way many other species of ants do; instead, individuals display frantic, erratic movements, which gives them the appearance of being “crazy”. Another distinguishing characteristic of this species is that they live in very large colonies. Crazy ants’ colonies are much larger in size than other ant colonies, and therefore, have the potential to invade homes and other buildings in very large numbers. 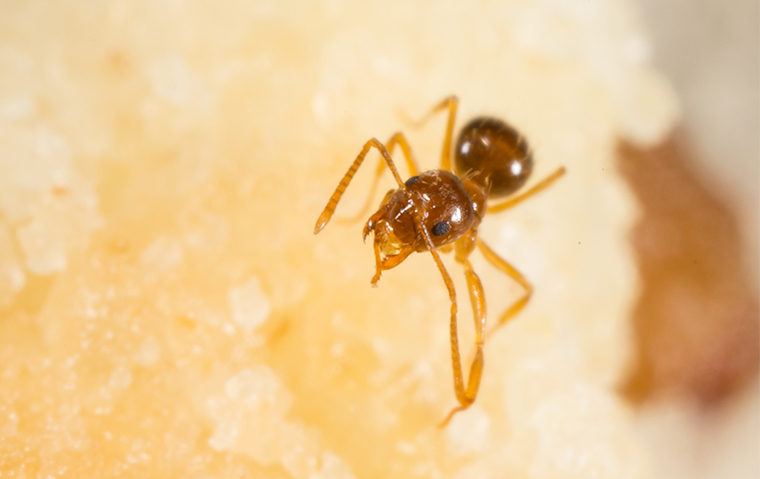 White-footed ants are a small species of ant, and thousands of them live together in vast colonies. As their name suggests, their “feet” are a pale yellowish-brown color while their legs and body are a much darker black or brown.

This ant species is most active during Florida’s rainy season when plant growth is at its highest. White-footed ants love to feed on honeydew—a sweet sticky substance produced by aphids and other garden pests as they feed. These nuisance ants are also common home invaders finding their way inside to search for sugary liquids.

White-footed ants regularly get from one place to another on plants, so inspecting any new plants you are purchasing from a nursery is important before bringing them home. 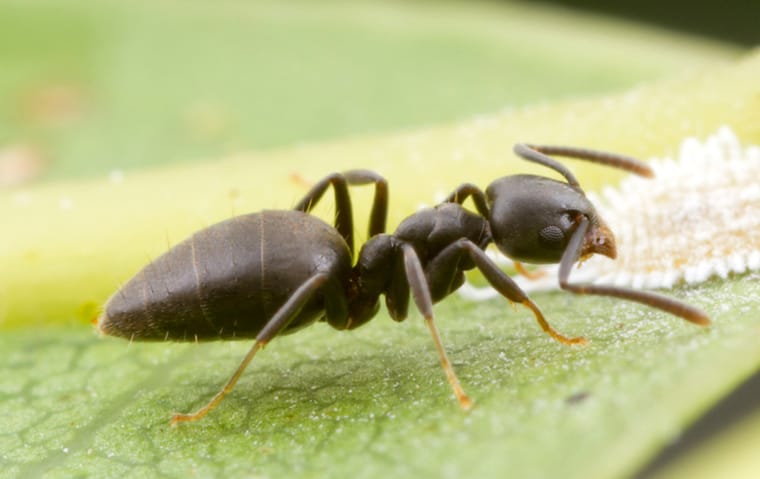 Ants are known for loving sugary, sweet substances. While they prefer sweets, they will eat most anything edible, from fruits to vegetables to meat. They need water to survive, which can also be an attractant.

Ants are usually harmless to the health of humans, but fire ants can bite and sting if disturbed. The stings are painful, almost like a burn, and some people may need to seek medical attention if an allergic reaction occurs. Carpenter ants, though not a health threat, are capable of causing extensive damage to structures if not treated.

How Do I Get Rid Of Ants?

Lindsey Pest Services uses an Integrated Pest Management (IPM) approach to getting rid of ants. Our expert pest control technicians will inspect your property to find what species are infesting, where the ants are active, and where their nests are located. Once we’ve evaluated the ant problems, we’ll determine the most efficient method of ant control. Next, we'll eliminate the colony of ants and, if you choose one of our home pest control plans, we’ll perform ongoing maintenance to ensure the colonies don't restart while keeping new ants from entering your home.

Why Ant Infestations Are Best Left To The Professionals

What You Ought To Know About Jacksonville's Ants

“ This company is incredible. We had a pest problem that was causing us a lot of distress and everyone in the company we interacted with was professional, reassuring and competent. And most important, they eradicated the problem quickly! I can't say enough about how wonderful they are - thanks so much for everything. 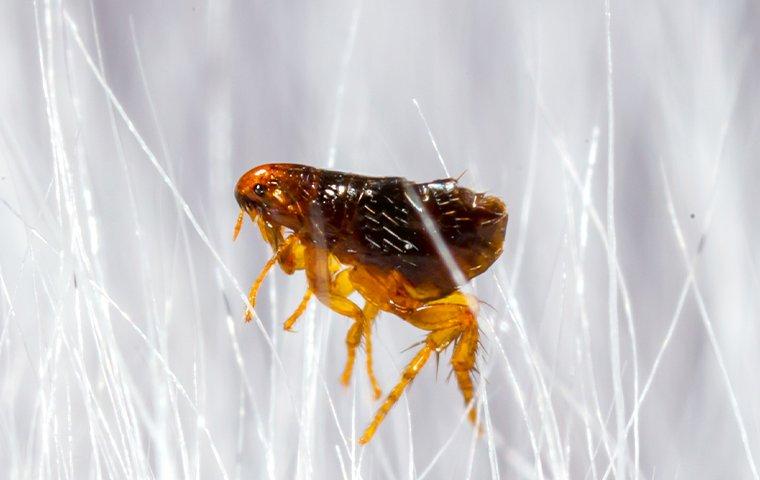 What You Need To Know About Effective Flea Control In Jacksonville

We sometimes believe that larger insects are the pests we need to worry about the most, but these… 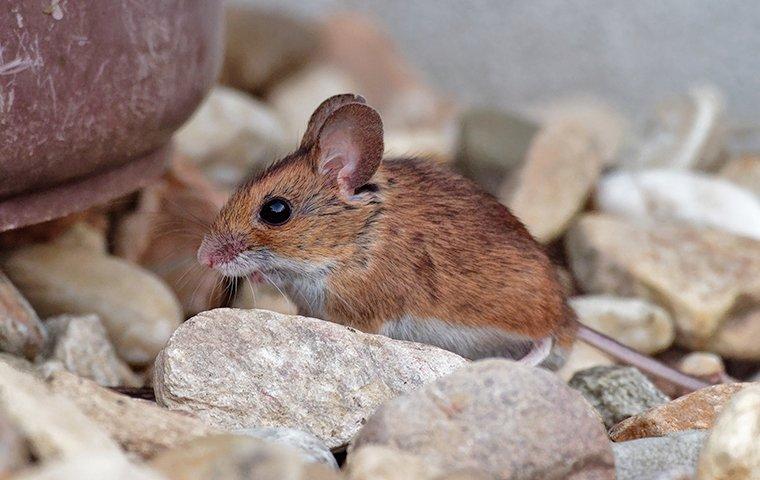 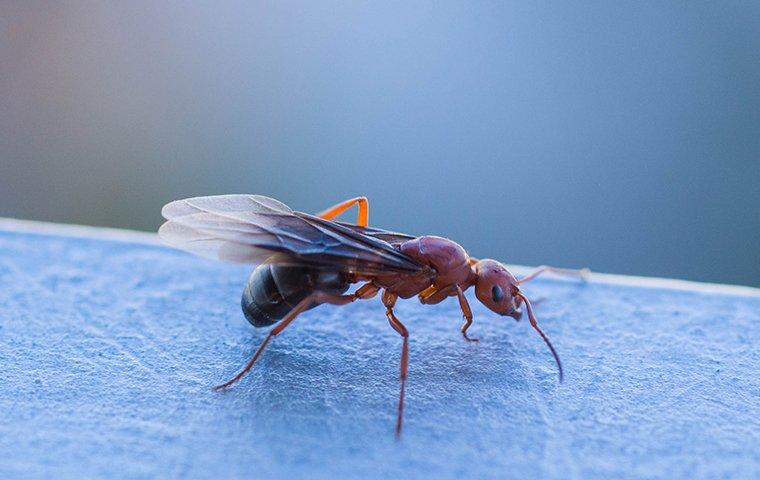 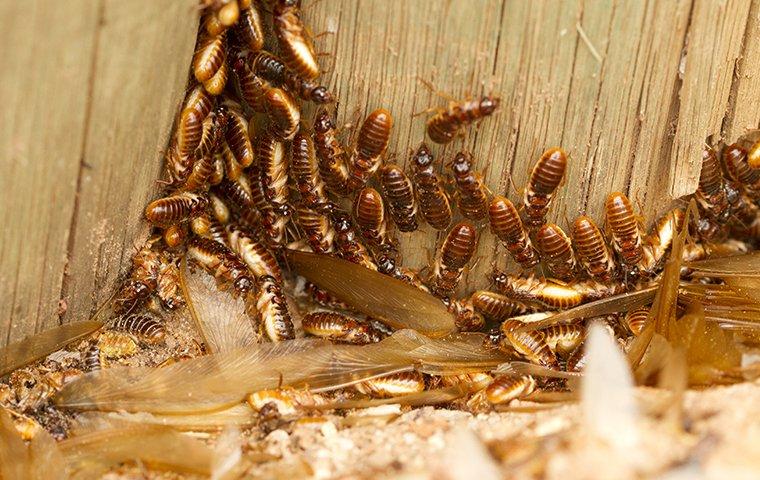